Home click here to see the details on the upcoming group show I’ve been invited to participate in at Gallery 78. 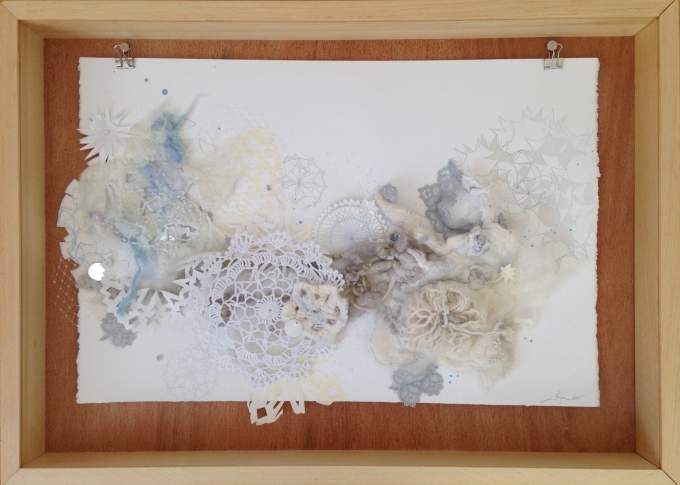 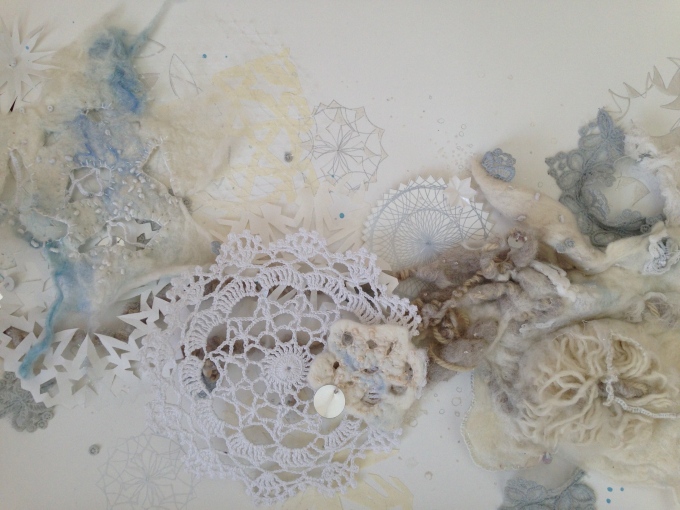 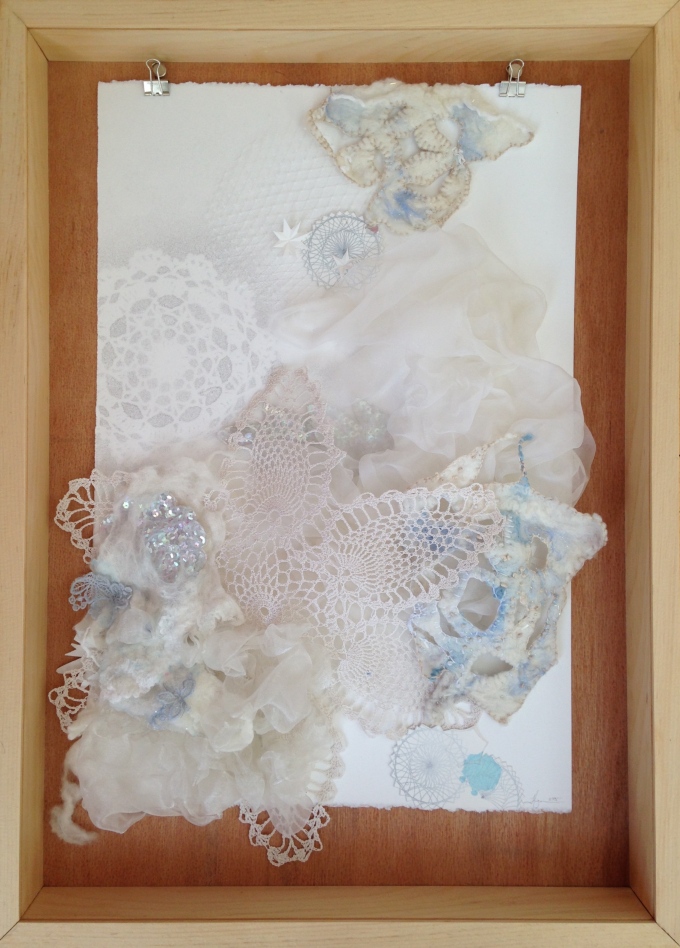 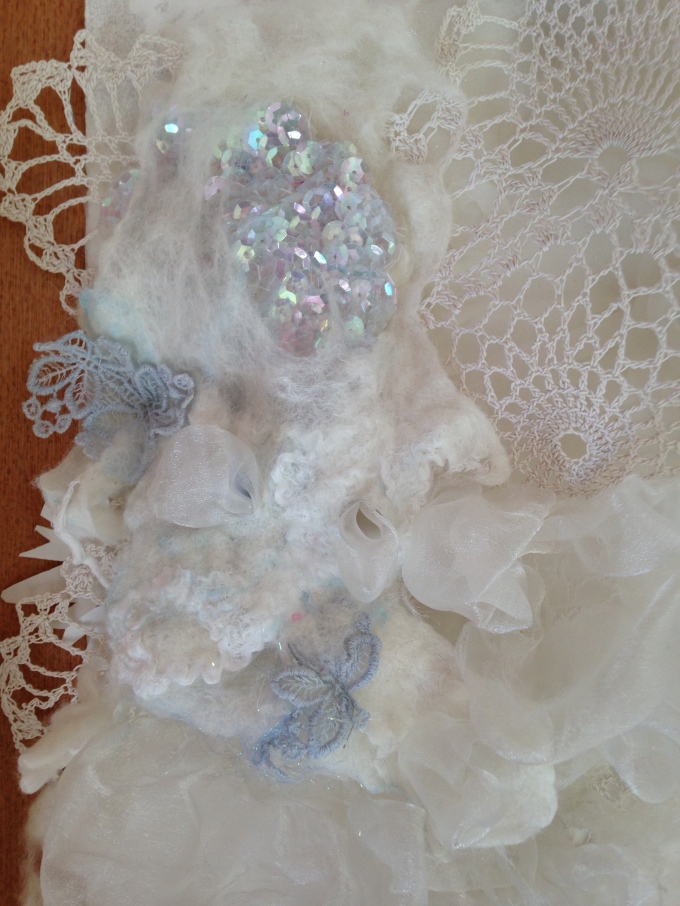 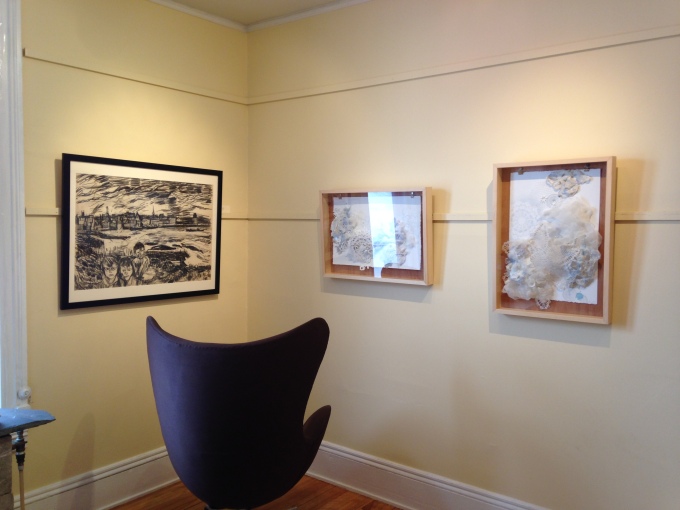 To the left is a drawing of Bruno Bobak‘s and my pieces ‘February’ and ‘March’ are on the right. 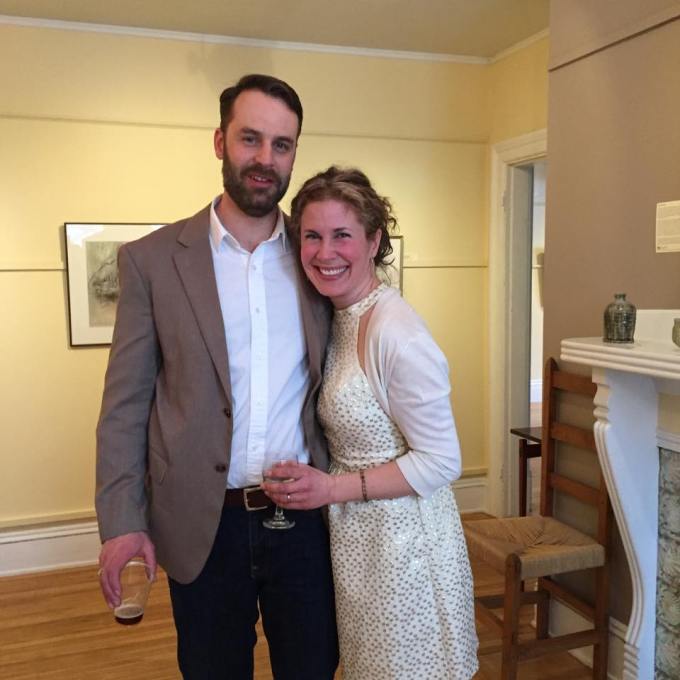 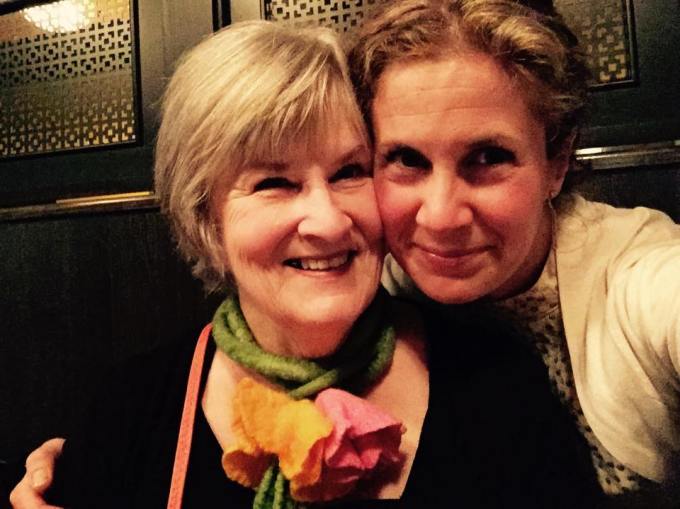 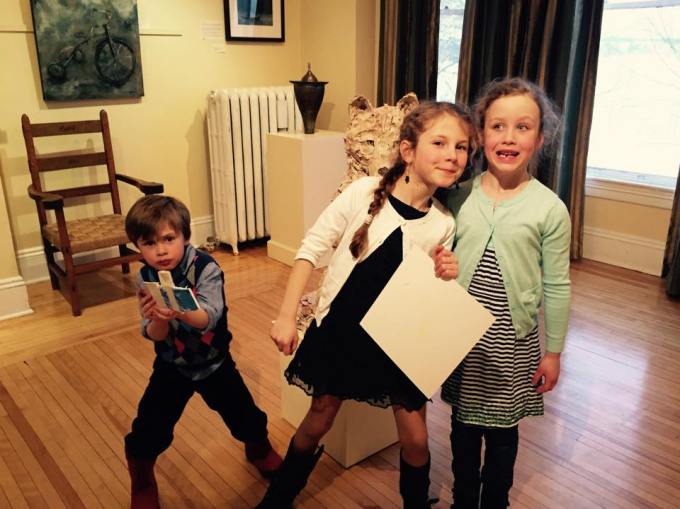 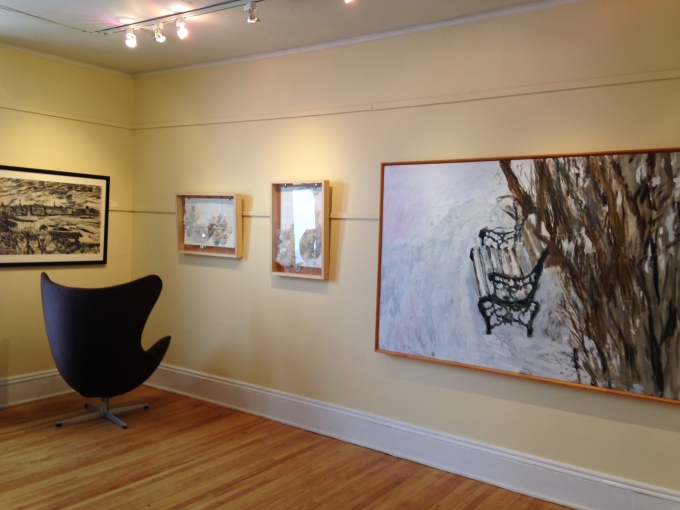 In this image from Gallery 78 from left to right are Bruno Bobak’s work, my pieces ‘February’ and ‘March’ and a painting by Steven May. 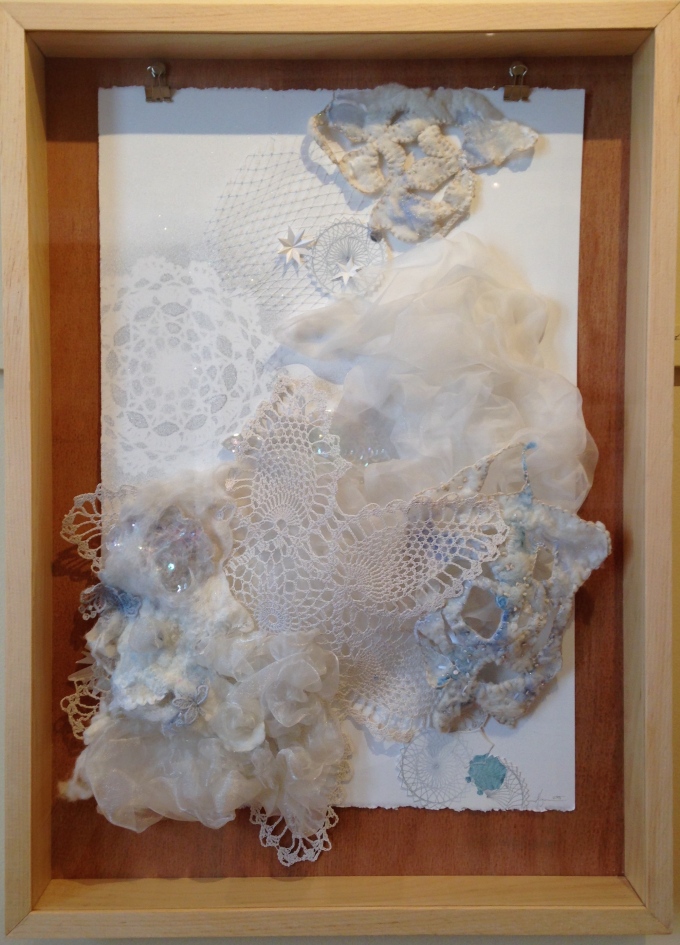 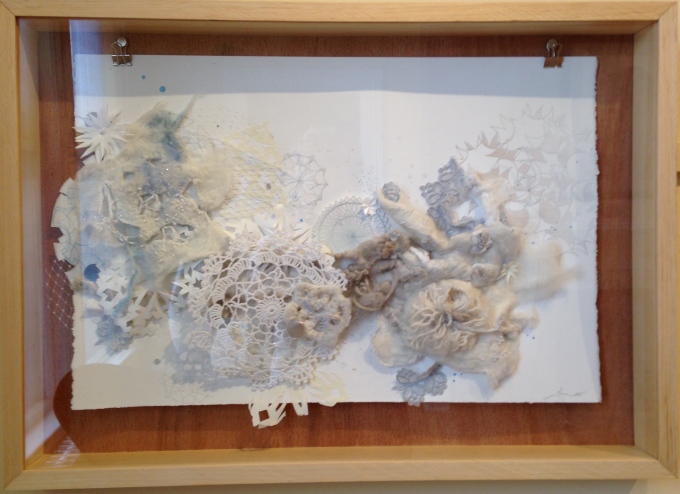 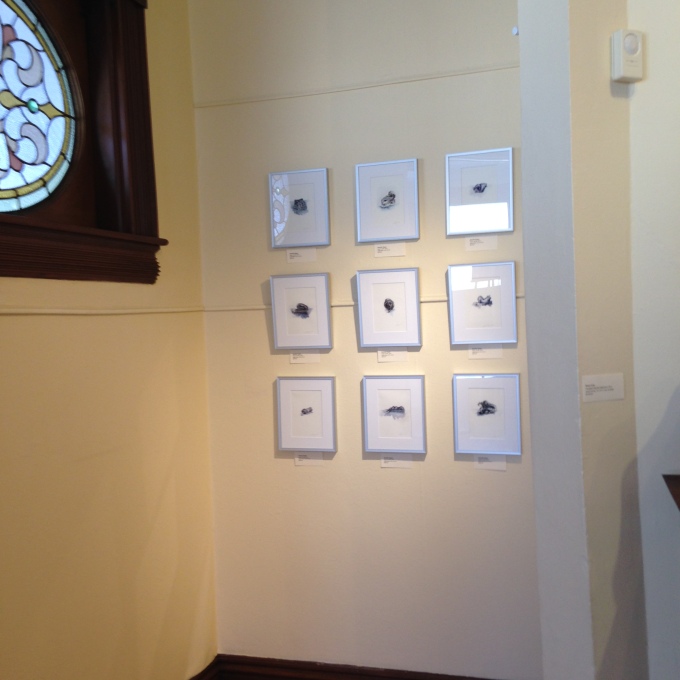 This is Lint Work installed at the gallery. 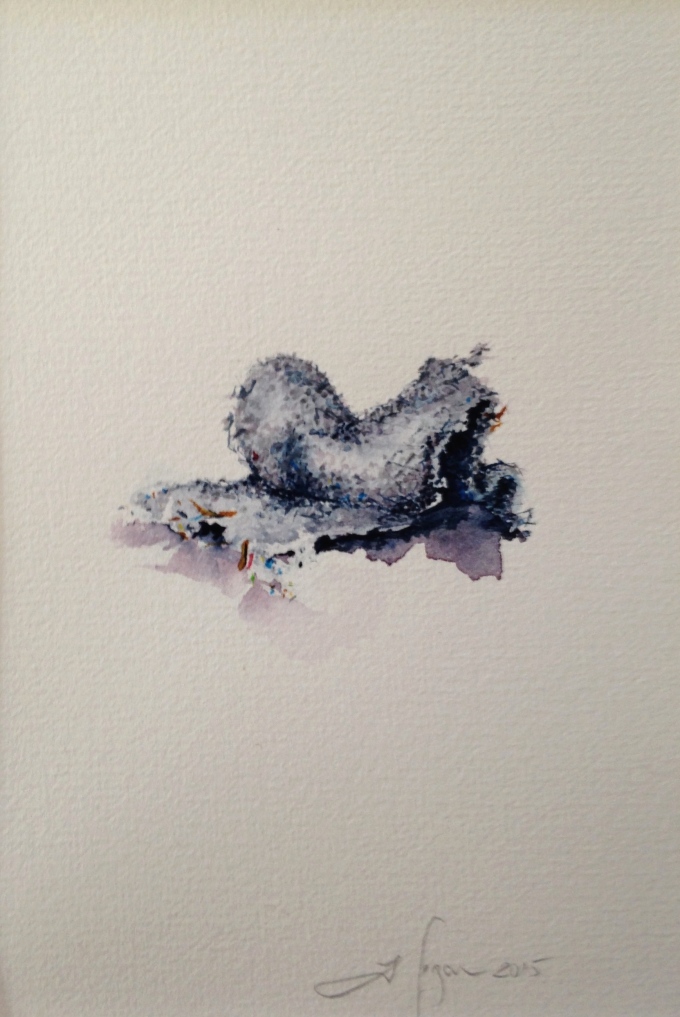 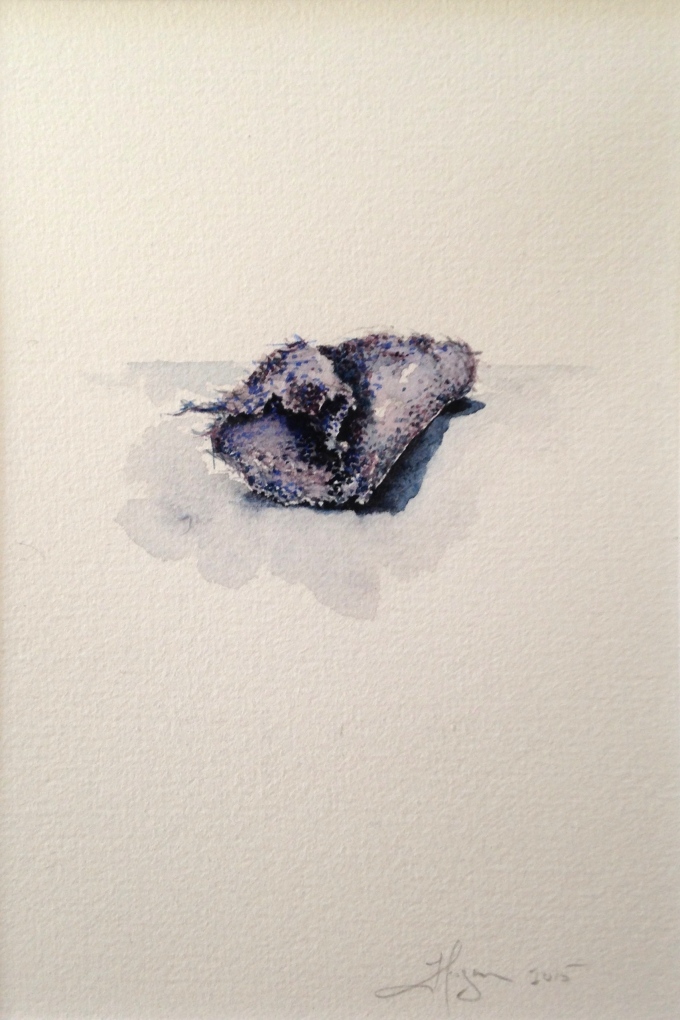 “The studio is a place of inquiry that is not bounded by walls or removed from the daily grind of everyday life. Furthermore, studio art experiences include the full range of ideas and images that inform individual, social, and cultural actions.” (p.73)
I should say that I detest the weekly grind of laundry that is an inevitable part of family living, yet because my office is currently in our home I repeatedly guilt myself into fitting this particular chore into my workday. Reading Sullivan’s quote about the studio being “not removed from the daily grind of everyday life” prompted me to begin (spitefully at first?) to photograph the felt/lint that I removed from our home dryer and to post those photos on my blog. Now, I see this as a way of claiming that labour as part of the labour of my making practice. So, I am trying to connect the dots; to own the housework as an honest and legitimate part of my making work, and to ‘out’ myself as a 2015-feminist who routinely makes housework a part of the work I do while at the house during the day. I see this as an interesting part of the ongoing conversations regarding feminist identity today.

My own inner ‘jury’ is still in deliberation as to how those initial photos hold-up creatively to the more rigorous sculptural work that I am currently engaged in. However I feel that the comparison or at least a recognition/acknowledgement of laundry-work is theoretically valid to my practice and good thing, because now it’s into second year!

Lint Work – the watercolours – are a direct result of the collection of photos which appear on my blog. After a certain point I became interested in the many layers of wash that are evident in each collection of lint. I realized that I could tell for example by looking back into the layers, whether or not ‘dark loads’ had dominated the majority of my week or that I had taken on the particularly arduous task of collecting and whitening our “whites”. Additionally I became intrigued by the ‘confetti’ of coloured paper scraps, wood chips and more generally, all of the debris, which amasses at the edges of the collected lint.

The small watercolours in Lint Work are the product of this preoccupation.